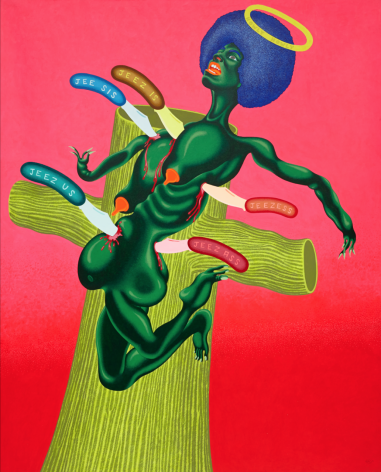 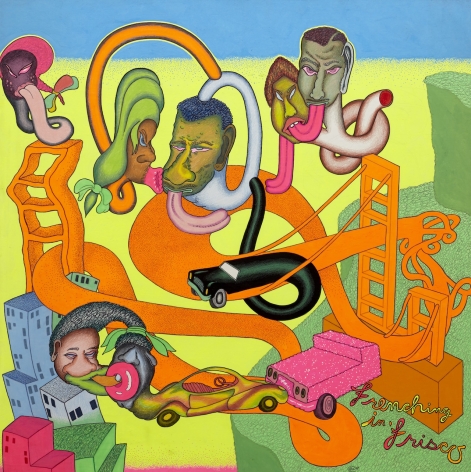 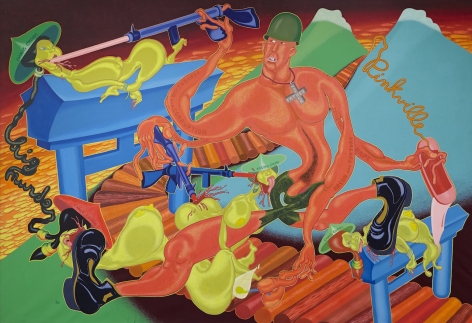 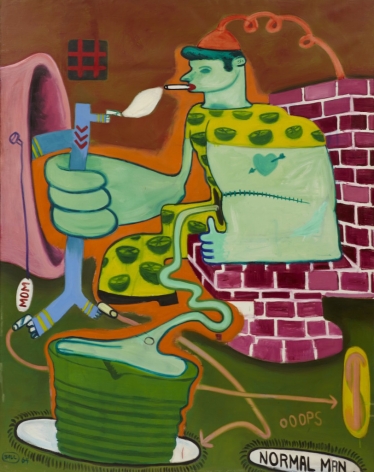 Peter Saul’s anarchic imagination is a singular phenomenon in American art. He seems to have channeled the madcap humor of Alfred Jarry, who coined the term “pataphysics,” and the sharp observant eye of Honoré Daumier, along with much else, including Salvador Dali’s melting forms, Thomas Hart Benton’s muscular figures, Jackson Pollock’s all-over compositions, and the jarring colors of Op Art. The result is an unparalleled body of work done over the past fifty years that the art world has yet to fully address, much less embrace. While Saul’s art may have anticipated the work of Kara Walker and Sue Williams, as Roberta Smith recently wrote in her glowing New York Times review (March 12, 2015), or point to artists, such as Carroll Dunham, who have claimed him as an influence, in the end he stands alone.

The reason Saul stands alone is because he does something unique in the annals of postwar art: he elevates his rage to the point that it undermines its own didactic impulses. In fact, there are times when Saul does something seemingly impossible; he is didactic while simultaneously mocking his didacticism. He can home in on a particular subject, such as the Vietnam War, with unparalleled ferocity, while expressing glee that murder and mayhem are among his subjects. It is this unlikely combination of outrage and delight that sets our teeth on edge.

Saul does not try to moralize, as the great eighteenth-century English caricaturists Thomas Rowlandson or James Gillray did. Satire and caricature are too polite for an artist as fierce and funny as Saul, who loves to paint gelatinous or viscous bodies erupting or spewing gobs of goo. The wonder is his ability to channel his anarchic impulses into paintings in which formal beauty is inseparable from pointed outrage and merriment.

In the exhibition Peter Saul: From Pop to Punk at Venus Over Manhattan (February 25–April; 18, 2015), there are sixteen paintings and five large drawings the artist did between 1961 and 1973, a tumultuously violent decade in American history that continues to cast its dark shadow over the present. This group once belonged to his dealer Allan Frumkin (1927–2002), whose gallery in New York represented an alternative to the prevailing taste for Minimalism, Color Field Painting, Pop Art and Painterly Realism.

Much of the work has not been seen since it was first shown, and in that regard this exhibition offers us a tightly focused view into what Saul was up to during a turbulent era marked by war, race riots and assassinations. The group includes six paintings done in oil between 1961 and ’67, three done in acrylic and pencil in 1966, when the artist started to switch mediums, and seven done in acrylic between 1967 and ’73, while he was living in California (1964–75). Although Saul has been connected to Pop Art and its use of cartoon imagery, his deeper connection is to the lawless spirit he first saw in the pages of Madmagazine in a Paris bookstore in 1958.

In “Pinkville” (1970), a huge, orange, naked American G.I. wearing gleaming black combat books is busy shooting, stepping on, or crushing four, naked Asian women whose skin is a bilious green. The pigtails of two of the women are joined together to spell “big murder.” When it comes to stereotypes, Saul pulls out all the stops. Each woman is wearing a traditional conical hat with a name printed on it: Ching Chang; Chung Chong; Ching Chong; Chung Ching. Saul’s attention to details is where his genius becomes evident. The distortions he wreaks on the bodies are both horrific and hilarious.

At a certain point, you may even begin to wonder — is Saul against the war or for it? The reason you might entertain this question is because, in addition to depicting the G.I.’s indefensible violence against four naked and bound Asian women, Saul taps into the racist and absurdist humor embedded deep in our culture, from the parodying of Asian names to the spotless army boots.

Saul’s delight in placing pink next to red next to bilious green, not to mention working out the mind-boggling contortions of the bodies, implicates both himself and the viewer. We find humor in the weirdest and most horrible things out of necessity, as much as anything else. Nobody is innocent.

In “Crucifixion of Angela Davis” (1973), each of the five knives plunged into the twisted dark green body of the once-polarizing African American scholar and activist has a variation of the word Jesus on its handle: Jeez us; Jee sis; Jeez is; Jeezess; Jeez Ass. You can imagine from which part of the anatomy this last knife protrudes. Is Davis a symbol of “us” or is she our “sis,” as the words on two knives suggest? Or is she just an “ass?” This is what I love about Saul. He doesn’t make it easy, doesn’t let you off the hook just because you are convinced that you’re on the right side of history. Rather, he plumbs the wellspring of bewilderment, rage, helplessness and dark humor bubbling inside each of us.

In “Self-Defense” (1969), which is about the Black Panthers, it is useful to look at the way Saul uses color to demarcate a particular body or object, while stretching and contorting the forms so that they wrap around and penetrate others. Everything is connected to, or entwined with, something else, requiring the viewer to scrutinize the painting to comprehend which body part belongs to which character, moving away from the overall composition to examining the details.

Saul’s ability to keep in mind both the complicated overall-composition and its myriad details is where he diverges from the political cartoonists of the 1930s and the underground comic book artists who were blossoming in California in the 1960s, while he was there. The details may enhance or undermine the painting’s so-called “message.” Why are Ronald Reagan and a haloed Martin Luther King next to each other in “The Government of California” (1969)?

In “No Title” (1969), the artist has written the phrase, “frenching in frisco,” in the lower right hand corner of a drawing ostensibly about kissing. For all the mind-boggling bodily contortions, penetrations and eruptions Saul makes his subjects endure, we must not overlook his acute powers of observation, his sympathy and willingness to be whimsical.

There are no sacred cows in Saul’s pantheon, no subject that is off limits. He hates pretension. You got to love an artist who titles a painting “Clemunteena Gweenburg” (1971), which is not in this show. Saul has never been an artist who played it safe, which is one reason why New York has never fully warmed up to him. They don’t want loose cannons, which is exactly why we need Saul.

Peter Saul: From Pop to Punk continues at Venus Over Manhattan (980 Madison Avenue, Upper East Side, Manhattan) through April 18.