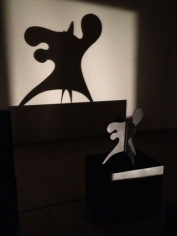 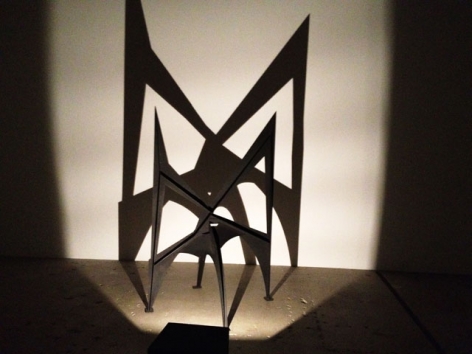 When I was little I went to the Whitney Museum over and over to see “Cirque Calder,” Alexander Calder’s three-dimensional cartoon of performers preening, frozen in mise-en-scène. In an early film, their death-defying acts are set in motion, but it’s no magic show — the illusion is interrupted by the pudgy hands, ruddy face, and spitting mouth of the artist himself, a grown man crawling on the floor, playing like a child.

Walking into Calder Shadows, on view at Venus Over Manhattan, I felt the same childish camaraderie with the artist, only this time it held fear of the bogeyman. In the gallery, shadows slide up the walls in unsettling shapes, moving compulsively. They stem from works ranging from 1929 to 1974, the earliest a wire portrait and the latest a glimmering, raw-edged fish skeleton of a mobile. In between are stabiles, maquettes for large-scale sculptures, and rarely seen mobiles — one of which, “Little Black Flower,” hasn’t been exhibited since the 1940s.

In art, shadows fulfill both the trick of realism, because they lend corporeal weight to the two-dimensional, and the experiment of surrealism, distorting the familiar by linking it to the unknown and often ominous. In Plato’s Cave, shadows weave the veil over our eyes, one step removed from truth. For Pliny, painting emerged when a woman drew on the wall, tracing the shadow of her departing lover.

Calder made use of shadows when planning monumental works, projecting silhouettes to get a sense of scale. A 1930 photograph reveals that he originally displayed his wire sculptures dangling before sheets of white paper, emphasizing the effect he’s best known for, “drawing in space.”

But the showing at Venus Over Manhattan, while co-organized by the Calder Foundation, doesn’t claim to adhere to the artist’s intentions. The darkness removes some of his most crucial stylistic elements: the handmade surfaces, texture, and color that make his craft more than a balancing act. What remains is the austerity of form and movement.

Calder’s mobiles aim for mimesis in their biomorphic forms and behavior; they function as nervous systems with reactions and reflexes. Calder Shadows, on the other hand, is not about nature — it’s a spectacle. Fans blow the mobiles at a defined pace, while the lighting effects cast angular frames of white illumination reminiscent of German Expressionist cinema.

With the removal of one dimension from each object’s three, the shadows double, intersect, enlarge, and flatten, revealing characteristics hidden in the light. “Ex-Octopus” (1936) tiptoes on two thin legs; “Morning Cobweb” (1967) terrifies by way of Napoleon complex; and the wire portrait “Untitled” (1929) builds up contours over time like attempts in a sketchbook.

Calder’s tendency toward lightheartedness leads some to disregard his work as unserious, merely clever puzzles. But the mobiles have gravity in their inherent resting positions, which museum visitors know all too well. Having been scolded by guards many times in the past for trying to blow my own personal gusts, this show is a revelation for its willingness to play. The organizers go so far as to pump Max Roach’s asymmetrically swinging cymbals through speakers, a choice by turns predictable, self-conscious, heavy-handed, and smart. Roach once said of his compositions, “It’s about design. It isn’t about melody and harmony. It’s about periods and question marks. Think of it as constructing a building with sound. It’s architecture.”

Calder was a builder of controlled designs, but he was also an eager performer. Under these stage lights, his works dance and play all day long, proving they can keep the beat without his hand to guide them.

View on Hyperallergic
Back To Top