Venus Over Manhattan is pleased to present a selection of work by Ed Paschke for the inaugural presentation of Frieze New York's Online Viewing Room. The presentation comprises a group of important and historic works by Ed Paschke, whose technicolor portraits of provocative subjects established him as one of the most important artists to emerge from Chicago in the last fifty years. Rising to prominence alongside a group of artists who came to be known as the Chicago Imagists, Paschke’s production was distinguished by the range of its references, which, at various moments in his career, included circus freaks, tattoo artists, physically deformed figures, ambiguously gendered bodies, and sideshow attractions. Supplementing his studio practice, Paschke took on various jobs, working as a factory hand and a psychiatric aide, experiences that connected him with the breadth and diversity of Chicago’s urban communities, while simultaneously informing the content of his practice. Celebrated for the technical mastery with which he rendered his figures, Paschke made paintings with nearly photorealistic precision, endowing his subjects with a confrontational, nearly physical presence. Following a major retrospective of his work at the Ashmolean Museum, Oxford University, the presentation comprises a tightly focused group of major paintings that illustrate many of the major visual strategies that defined his production, blending references to circus posters, carnival acts, religious icons, tattooed figures, and dissolved figures. Taken together, the presentation highlights the singular force of Paschke’s imagery, positioning his work alongside that of the greatest figurative painters of his generation.
For further information about the exhibition and availability, please contact the gallery at info@venusovermanhattan.com
For all press inquiries related to the exhibition, please e-mail press@venusovermanhattan.com 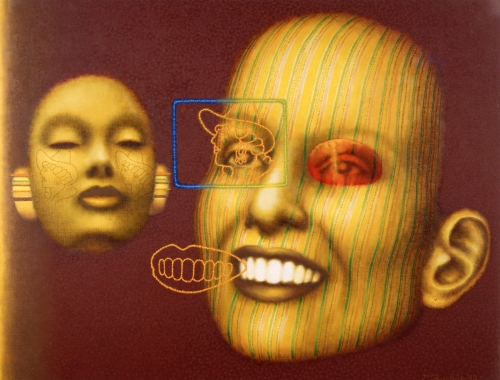 Ed Paschke
Back To Top