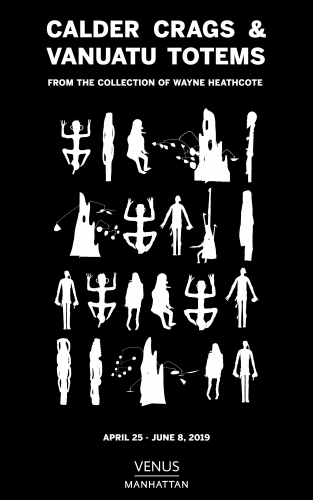 (New York, NY) – Opening on April 25th, Venus Over Manhattan will present Calder Crags and Vanuatu Totems from the Collection of Wayne Heathcote, an exhibition comprising a suite of large-scale standing mobiles by Alexander Calder, and a group of historical Vanuatu figures from the Ambrym, Banks, and Malekula islands. On view through June 8th, the presentation will provide an unprecedented context in which to consider the powerful achievements of these uniquely transcendent sculptural forms.

Alexander Calder’s Crags comprise a series of standing mobiles produced in 1974, first exhibited at the Perls Galleries in New York. Each work features both stationary and kinetic elements, representing a fusion of Calder’s colossal stabiles and delicate mobiles. The Crags consist of large, undulating forms that rest directly on the floor, cut from sheet metal and painted black. The steep curves and perforations that typify these shapes suggest visions of mountainous terrain, recalling the graphically simplified topographies of 19th century Japanese watercolors, with their cliffs, crags, and escarpments. Situated between the peaks and the valleys of their bases, the Crags incorporate balanced kinetic elements, painted in a primary palette, that dance gently through the air. The complex layering of individual planes, cascading forms, and contrasting colors, represents a synthesis of Calder’s diverse aims, marrying the weighty permanence of his bold constructions with the agile beauty of his suspended shapes. The exhibition also includes two of Calder’s Totem works, which dramatically cut through space much like his more well-known stabiles, but furthermore delineate sculpted masses open on one side, only apparent to the astute observer. Taken together, Calder’s Crags and Totems bear out a uniquely rendered vision of an extraordinary mindscape, replete with enchanting and complex geographies. 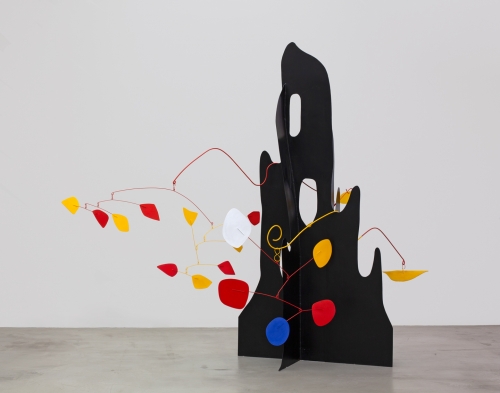 The circulation of ethnographic objects across Europe and North America impacted the international avant-garde, particularly the Surrealists, in various ways. Like Pablo Picasso, Henri Matisse, and André Breton, Calder collected and displayed African and Oceanic objects, and at certain points in his career, Calder’s works hint at formal resemblance to a number of these objects. In his homes, Calder frequently displayed his own works alongside his collection of African and Oceanic objects. In the spirit of such juxtapositions, the exhibition will present a major group of over twenty Vanuatu figures, produced on the Ambrym, Banks, and Malekula Islands, alongside Calder’s Crags. 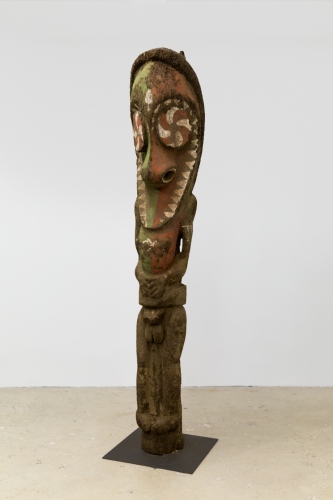 The Vanuatu figures on view hail exclusively from the collection of Wayne Heathcote, a leading collector and dealer of Oceanic art. Heathcote acquired the collection in the early 1970s, through Nicolai Michoutouchkine, founder of the Museum of Oceanic Art in Port Vila, Vanuatu, after having served as a field policeman on the Sepik River in Papua New Guinea. The core of the group comprises two sets of towering fern figures, notable for their distinct stylistic differences. The larger group, featuring curvilinear forms and bright sections of hand-painted color, represents a formal approach unique to Ambrym, centrally located in the archipelago of Vanuatu. The second group, which features a more geometric approach to figuration, is unique to the Banks Islands, located at the northern end of the archipelago. A third group of smaller objects, typified by fully rendered figures over-modeled with a mixture of earth and vegetable matter, represent figuration from Malekula, the archipelago’s second largest island. 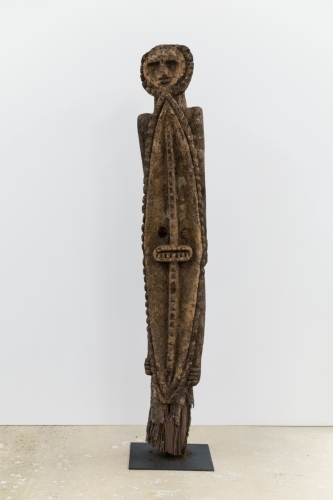 Though the individual characteristics of the communities that comprise Vanuatu vary significantly among its islands–some 100 languages are spoken among the nation’s 250,000 inhabitants–the region is bound by a general social, political, and religious structure known as Kastom. The particularities of this cultural system vary between communities, but central to the societies on the Ambrym, Banks, and Malekula islands is the “Grade” system, a hierarchical structure through which members of the community advance their status. The three sets of figures, then, represent works commissioned by individuals as ritualized offerings that permit entry to successively higher grades. As Crispin Howarth notes in his book, Kastom: Art of Vanuatu, “[t]he commissioned sculpture is a form of public monument that, along with drumming, performance, and sacrificing pigs, signifies that an individual is taking a new grade.” Carved from the fibrous trunk of the fern tree, these figures function as temporary homes for spirits associated with specific grades, and represent uniquely figurative approaches to sculptural form. 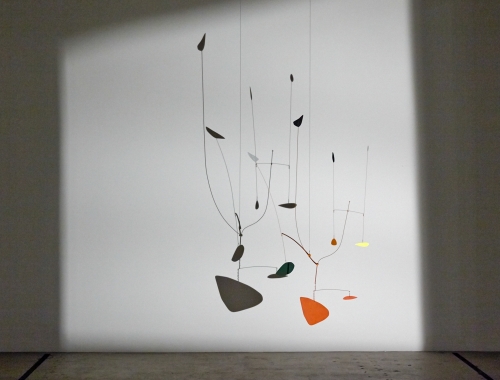 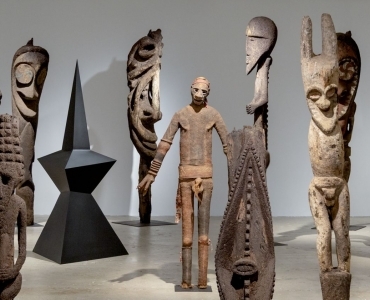 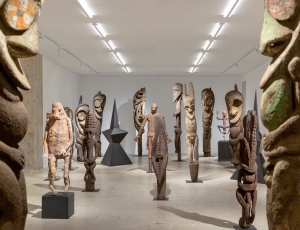 In a contemporary art gallery, it’s not often that Calder takes a backseat to ethnographic artwork but Venus Over Manhattan never fails to turn things on their head. Their latest exhibition, Calder Crags and Vanuatu Totems from the Collection of Wayne Heathcote, on view until June 8, 2019, presents a towering group of historical Vanuatu sculptures from the Ambrym, Banks, and Malekula islands alongside a suite of large-scale standing mobiles and crags  by Alexander Calder. 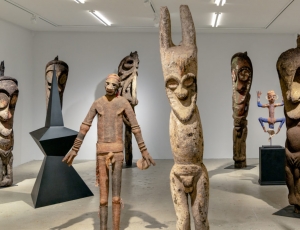 Editors’ Picks: 11 Things Not to Miss in New York’s Art World This Week

From Björk at the Shed to a power-packed panel on Lucian Freud at Acquavella, there is plenty to keep you busy. 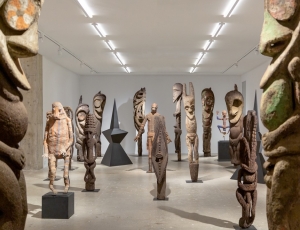 Calder Crags + Vanuatu Totems from the Collection of Wayne Heathcote

From the Collection of Wayne Heathcote